Parents Behaving Badly During A Split: Some 'Springer's Final Thoughts' on Olivia Wilde's Crap at Cinema-Con

I got in a Facebook fight with someone over some internet noise about a celebrity, because that’s definitely what I should be doing late on a Friday night instead of sleeping—or at the very least, watching Inkmasters.

Scary Mommy had this sloppy piece on poor, hapless Olivia Wilde, who was apparently minding her own business while talking to some nerds at CinemaCon when a wild process server appeared.  As the story goes she was suddenly served with some custody papers in public.  And although celebrities have been known to professionally embarrass themselves for hours at a time (read: hanging out at a comic book convention for people who own theaters), this may have been a little jarring for Ms. Wilde.

But Scary Mommy sympathized with her and it was triggering as sh*t. And I’m having a hard time sitting on my keyboard hands with this one.

The major parental dumbassery in the news these days actually has more to do with parents of a couple of grown children. But both Johnny Depp and Amber Heard’s respective kids are gonna be pretty wigged out when they inevitably hear about their mom and dad laying Cleveland steamers in each other’s beds and stuff like that. So maybe I shouldn’t worry too much (duh) about this.

But as someone who suddenly had to be both mommed and dadded by my dad when I was a kid, I have thoughts.

Celebrity news is often curated by PR peeps when their charges aren’t doing well.  It’s no surprise to many that it’s actually someone’s job to fire people up about things relating to a famous person.  This might make people care enough to see their movie.  These are reps, bloggers, and who-have-you.  But I’m taking the bait.  You see, I was a child of an ugly divorce and its customary custody brawl, and as such I'm familiar with what happens to minor kids when one of their parents decides to leave.

I’m just a mom and a wannabe internet pundit, but here’s my deep thought. Don’t leave your f*cking kids. Just don’t. Don’t do it.

Don’t do it unless you are quite literally a real-life version of Monica from Shameless, with intractable addiction issues and wildly untreated psychiatric sequelae.  And even then?  Don't leave permanently and take up with someone else; take a time-out and get your sh*t together.

I am almost certain I am getting some of the details wrong here, but unless I’m completely mistaken, Ms. Wilde is a parent who peaced out.  But just because you wanted to play the skin trombone with a new dude’s peen doesn’t mean you should like run off with Justin Bieber or whoever.  And if you do, your little kids shouldn’t have to take a spin on Mr. Toad’s Wild (Custody) Ride every however-often with a visitation agreement that's particularly generous to you. Even if somebody's separated parents live close to one another, that's still some exhausting sh*t.

There are good reasons that courts don’t look as kindly on the parent that moves out. Studies have recently confirmed that it’s actually worse for you to be abandoned by your parent than to be HIT BY THEM with a high-heeled shoe, Eddie-Murphy’s-mom style in Raw.  I don’t want to make light of child abuse or relationship violence in any way (especially with terrible puns). But it is truly striking how harmful it can be for a kid to not be around their parent very much anymore.

When you leave, you forfeit more than just a logistical upper hand in custody stuff or the low-hanging fruit that makes up an easy PR plug.  You lose any moral relatability, too.  Something was awkward for you?  Too bad; you left your kids and people can't relate to that.  You tripped over a concrete median and knocked your two front teeth in while spilling a crackhead's cup of p*ss all over your Louboutins?  Too bad!  You f*cking left your kids.  And a lot of moms can't relate to that.

Most importantly, your kids lose the innocence of when they used to have a parent who wouldn't ever harm them for selfish reasons.  So the parent who stuck around is the one they inevitably trust more.

For all parties involved, get over yourself and understand that when you birth some other humans into the world (or just bring them into your orbit, as with fostering and adoption), that world is no longer just about you. Would I still be saying this if Olivia Wilde were being kind of a lame MALE (or non-binary) parent instead of a female one?  Yep.  People don’t exactly love Dean McDermott—he left his wife and the mom of his first kid for the mother of all superfluous reasons (Donna on 90210), so now he gets to lie in a bed he made with her badly-done boob pillows.

Absolutely no sympathy from me.

Before you say, "Hey, some people leave and don't even want to hang out with their kids anymore!", wait a damn minute.  This is 2022, not 1962.  Golf claps are in order for you if you think it's reasonable these days for someone to set the bar so pathetically low in parenting a houseplant, much less a human.

So be a hard-charging, modern, millennial-@ss parent.  Suck it up and go to hella amounts of therapy if you’re really that unhappy in a romantic partnership that involves minor children.  Should you stay in an unhealthy relationship for the sake of your kids?  Hell no—fix that sh*t with years and years and years spent with a fleet of family, individual, and couple's therapists. Therapy isn’t magic but these people are pros. If you try hard enough and for long enough, you will eventually stop thinking it’s cool to bust nut with someone who was only seven months old when your babies’ daddy hit the legal age of consent.

Therapy’s expensive. But don’t tell me OW doesn’t have the money.  If you have a PR person and a stylist you can find a professional person to talk with about your life. 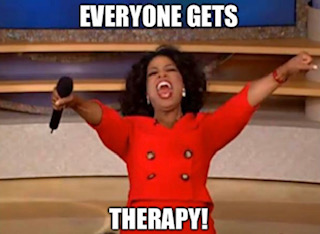 You may also be wondering why, if therapy’s so good, why do I still have obvious capital-M Mommy Issues?  Because, while you can accept your parents’ limitations as humans and even get to a place of forgiveness as a grown woman with children of her own, oftentimes that intense mom-daughter bond never quite makes a comeback.  I wrote about this (scroll down for the tangentially related story of how I finally broke up with my mom).

Also. This may sound judgy but I strongly believe that if I were a celebrity I would pick a more believable stage name for myself.  I'm looking straight at you, Ms. Wilde.

Come at me, bruh.

And “till next time, take care of yourselves. And each other.”