Namespotting Santa Cruz
& Surrounding Areas
A plundering of the treasure trove of cool names that is my California town.  Links to unusual name info courtesy of Nameberry.com.

Lennox.  Spotted on a little boy of about four, at my favorite mid-town hipster playground.

Sanneke.  A form of Sanne, a Dutch name analogous to Susanna.  It sounds like Sonic-uh.  I also know a Dutch woman named Nelleke, but wasn't sure how to pronounce it before I met (and inquired on the spelling of) Sanneke.

Leahi.  The Hawaiian name for geographic landmark Diamond Head, meaning "brow of the tuna".  Similar to Lehi, which is used in the Mormon community.  I’m assuming it’s pronounced like Levi.

Jory.  Wow!  This unisex, Cornish name is actually nickname I never knew about for one of my children's names.  Cool.

Salla.  A Finnish name.  Reminds me of Solla Sollew of Dr. Seuss fame.

Aloe.   There's a writer for Santa Cruz Waves named Aloe Driscoll.  It's a word and a nature-y one at that, and has a ready-made nickname (Al).  Thumbs-up from me.

Caia.  Caia Koopman is a Santa Cruz-based pop surrealist whose brainchild was this epic, ocean-themed mural (below) on the side of a midtown apartment building.  Note: Caia rhymes with Maya.  I like it almost as much as Naia.

Prudy.  Prudy Foxx is a viticulturist (a what?) and biologist who lives in Zayante.  Prudy means "caution", à la Prudence, but there's no indication Ms. Foxx is actually a Prudence.  I do love a good virtue name, especially one with a nickname that sounds unisex.  And Foxx is reminiscent of this guy, which is cool.

Doe.  If the future of naming is truncated word names that are evocative of the natural world, this is my pick for an up-and-coming name of the decade.

Beverly.  A retro (possibly becoming more unisex) pick that makes better sense than Everly and has a modern-sounding nickname, Bev.

Kami.  I am into these i-ending names for girls lately.  This could easily be a standalone name but may also be a short form of Kamille, Kamila, or Kamilah.  Also mentioned below are Penny, Jami, Cyrus, Mary Jo, and Alfonso.  Salli is the Finnish version of Sally and an offshoot of Salla (see above). 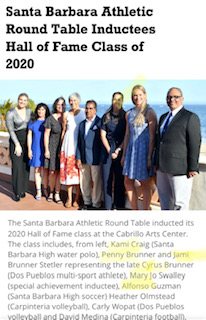 Kodiak.  Local photographer Kodiak Greenwood is equally likely to be male or female (or, of course, nonbinary) based on their Alutiiq name alone.  From the photography website, they appear to be male.  I can see this person going by Kody, but the full form is pretty glorious and calls to mind Alaskan adventures.

Bambi.  Along the lines of Doe, a local woman with a classic Disney name attracted my notice when she reacted to a piece of local news on Facebook.  I messaged her to ask about her unusual name (or nickname, as it may very well be) but haven't heard back.  #FacebookStalking

Ilea. I saw this name written on a local whiteboard IRL.  It may be a short form of Ileana or a permutation of Aliyah.  To protect her privacy, I won't say where I saw her name--it's so rare that it'd be weird of me.  I also sent her an unsolicited message about the origins of her name but she hasn't responded, probably because we have never met.  Weirdo move on my part.  Sorry, Ilea.