Land of Flowers and Nuts

Tiptoe Through the Lupines 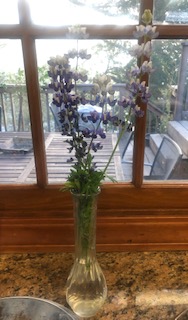 I thought some old-ish lady was trying to Karen me when she shamed me for picking these flowers by the side of the road.

“There’s not enough of those this year,” she motioned toward a hillside with acres of them.

Turns out, they were endangered lupines. And it’s a misdemeanor to pick any wildflower on public lands in California, even those irresistible sweet peas or whatever they are that line the roads in Bonny Doon every April. I didn’t get caught by the authorities this time but learned something new about the left coast state that is my home.

Apparently super-violent California criminals like Michael fucking Cheek can live among peaceable people, on privately owned roads, in the woods, with little to no supervision, butttttt if you touch any of these public-domain flowers we are going to have a situation here.

I imagined doing a little reiki on the lupines after putting them in that vase I like. They would’ve said it’s all good, girl. Pick away.