The Unbreakable George B

I once wrote a short post called “Will of Will”—this was back when I was using Facebook to blog. In any case, it was about our strong-willed son Will and how he would, in equal parts amazing and painful, throw himself on the floor as a young child whensoever injustice prevailed in his world.

I think Will (even his toddler self) may have met his match in his little brother.

We flew home from Michigan yesterday with George (along with the rest of our overtired cherubim) and I can honestly say I have never seen such a tantrum in all my momming days.

As is the case with many of the great epic tantrums, most of the fault was my own. In the interest of saving on airfare we’d made a deal with the devil: non-stop from LAX to Detroit on the way there, but DTW—>Philadelphia—>LAX on the way home. And hot damn if we didn’t get delayed by two hours before we could even start the first leg (Thanks, Obama). By the time we reached Philly and hustled straight to boarding, the connecting plane had already pushed back from the gate, but by some divine meddling from the SPIRIT crew, they stretched the jetway back out to the door and came back!

The crew and everyone else on the flight verrrry quickly came to regret their generous decision to include us, though. George was acutely slumbering, Thank Jesus, after having screamed his way through the first flight. And so it was that no one knew what was coming, as Joe herded our other four kids aboard and I carried my open-mouthed little angel to my seat, all swaddled in his favorite bee, surrounded by benevolent travelers bearing parcels from the airport Sbarro, and kissed on the brow by a twinkling star.

The other passengers had already been waiting awhile. Mechanical issues, they’d said. Then, more waiting for us, followed by more waiting in a line that was more than twelve planes deep. We waited and waited for there to be room enough on the runway to take off or whatever the hell it is that one always seems to need to wait for out there on the tarmac. Right as I’d sat down and buckled, George’s cornflower blue eyes unlidded themselves in a manner most unholy and he began to scream.

George screamed with his whole body. He violently jumped up and down in my lap. He stiff-armed me and tried everything in his power to get away from me. He tried to reverse-headbutt me (I was able to dodge it, having survived Elise’s toddler years). Naturally, this is where I passed him off to Dad, feigning disappointment that he is by far the favorite parent.

Folks were sympathetically staring at first, then turning to more desperate means of pacification. A kind stranger passed me a full bag of skittles (his favorite!). George screamed and threw some on the ground. Someone passed him a lollipop. He screamed and spun his head away from it like a cat who refuses to take a pill. A lady with white-lady dreadlocks gave him a huge, rainbow, twisty lollipop. At last he allowed himself to be consoled…for all of ten seconds. It was like we had caught a feral pig from underneath Uncle Jerry’s barn and tried to snuggle it to death. George used poor Joe’s lap as a springboard, and progressed to a point in his fury that would not stop crying unless Joe carried him to the back of the plane and stood by the restrooms. Daddy was not allowed to sit, use the bathroom, or do anything besides hold George in a perfectly upright position while standing.

George screamed for about half of the five-hour-long flight across the country. He screamed while we waited for our bags to file off the carousel. Then he screamed for the full duration of the shuttle bus ride to WallyPark. Only once he was securely buckled into his own car seat did he stop, and at that point it was nearly midnight P.S.T. (3 A.M. for those who had adjusted to East Coast time over the course of a vacation). Then, he was mysteriously chipper, talkative, and awake, while everyone else moaned with exhaustion. We got home at about 1 A.M./4 A.M, depending on whose time zone you were committed to.

We’ve decided not to fly anywhere with George again for at least a calendar year.

"In Soviet Russia, trampoline jumps you" -Will, having reached a golden age of meme appreciation

"When I get bigger, I'm going to drive a speed lemon" -Zach, struggling a bit with the concept of speed limits

6th Grade Promotion to 7th and other recent moments: 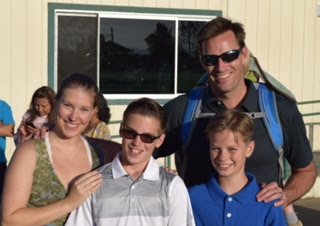 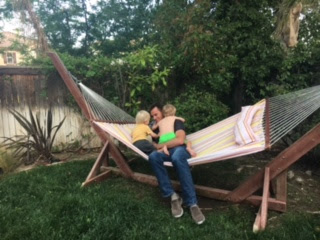 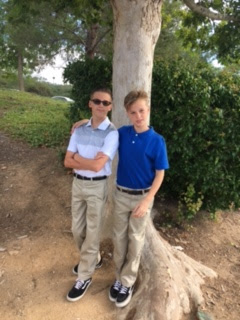 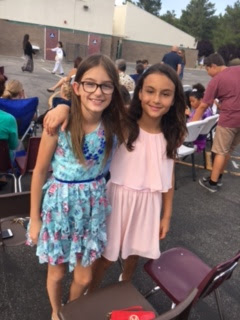 Moms to Whom I'm Especially Grateful

Or, A Nonexhaustive List of Awesome Women I'd Like To Thank Before Any More Time Goes By

Lizzie Gilbertson--you introduced me to LFP Preschool and the then-radical idea that I was fortunate to have been able to conceive fairly easily. I was a self-absorbed little twenty-one-year old twit when we first got to know each other, complaining about how exhausted I was to be "already pregnant again" when our first was so little, but you were nice to me anyway. I know for a fact that my kids benefited tremendously from your influence in bringing us into the community college co-op preschool "network" of parents. I'll always remember looking up to you, and I hope we will meet again someday.

Joanne Montague--Ten years ago you came over to my house and took care of my two toddlers (plus your toddler) so that I could nap with my infant for a few hours--just because. Sometimes I think about that and cry. How did I deserve such an act of friendship from someone I'd known only for six months? I might even still have your copy of "Peek-A-Boo Baby: Look at Me, I can Clap!" which has somehow survived another round of little mouths chewing on its cover. I hope that somehow you read this even if I'm too embarrassed to have Joe track you down on Facebook and send you the link.

Linda Harkness--you helped me realize when I was being kind of insensitive to my firstborn when he was a toddler and fell off the playground bus on one of his first days of co-op. Empathy was not a thing I was all that familiar with until I met you. I am so lucky to have had you in my life, especially during those first few years of James' and Will's.

Lisa C. McDaniel--you're one of the most positive, giving, and inspiring people I've ever met. I'm humbled by you and so blessed to know you.

Lesley Crane--remember the time you came over to my house and sat with me when I was really upset? I still can't believe what an amazing friend you were to me and I'm so sad that I have not kept in touch with you.

To the tune of k.d. lang's Constant Craving


Even through the darkest grays
Mom slaves, next of kin
Always someone's Frito-Lays
Here beneath his chin

And constant laund'ring has always been

Constant laund'ring has always been

My picks for future Kim-Kardashian spawn:

How are you spending your winter?

I'm spending mine in front of the TV--watching a certain children's movie (Kung Fu Panda 3!) on an infinite loop on Netflix--and waiting for the poop to be ready to go into the potty.

We're in that awesome phase of the toilet learning life cycle wherein we inexplicably don't want to use any bathroom besides our own.

Not the one at school, with the potties that happen to be just your size. Not at a restaurant. Not when we're dancing and clearly in agony since we are trying to hold it for three hours during an outing.

Update: But there was big progress today, on this Groundhog Day of all days! The lollipop bribe is working its magic.

"Is it p*ssing you off?" -Zach, empathically, while I was trying/failing to communicate with the lady who was working the Drive-Thru


We went to Mexico. The in-laws brought us. It was unbelievably fun, riiiight up until we got Hand, Foot & Mouth disease from the resort pool.

And later on, when Joe was putting the GoPro video on his YouTube Channel, we discovered another oldie but goodie [video; not a montage, though] from when we lived in Seattle:

"[A]ny single brain, including yours, is made up of atoms that were forged in the hearts of far-flung stars billions of years ago. These particles drifted for eons and light-years until gravity and chance brought them here, now." -V.S. Ramachandran

"Monkeys throw their poop, Mom." -Zach, in response to someone's idea that we all watch Marky Mark's Planet of the Apes soon