All Eyez On G

Two weeks ago yesterday, George was born at 35 weeks, and at least two weeks earlier than I'd originally thought he would be. He spent a week in the NICU, not strictly due to the prematurity but because he was breathing too shallowly when he first came out. Thankfully, he is home now and doing much better. I am much better, too, now that I'm not itching nearly as badly (curse you, cholestatic liver). 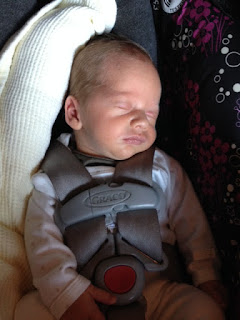 Here he is with Daddy. 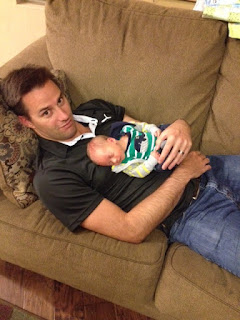 The NICU thing was pretty strange, especially at first. It felt SUPER, ALL SORTS OF WRONG to leave the hospital without George. I kept having bad dreams when I got home; not that I got much sleep anyway because I was supposed to be up every 3 hours pumping, and even when I did get a little shut-eye I would wake up drenched in sweat. When he finally came home I felt incredibly relieved, and not just to avoid fighting the traffic to see him.

So far, George seems to enjoy being awake often between the hours of 10pm and 5am, sleeping while being held, Skittles-flavored breastmilk, and pooping. He dislikes nasal cannulae and hiccups.

The kids are enjoying him, too. Even Zach has been pretty into him; he desperately wants to hold Baby George, but this is a dicey proposition for a two-year-old and a preemie. Maybe when he gets a little bigger and hardier (George, not Zach. Zach is plenty big and hardy--speaking of big, it is Will's tenth birthday today, and we just celebrated Zach's 2nd and James 11th. Quit growing up so fast, kids.)
Posted by Laurel B. Miller at 9:06 PM

I was JUST going to email you to see how you were!

Welcome baby George! I love his name. (I love all your kids' names...but that's besides the point.)

Sorry to hear about the NICU. Glad he's home and things are better now. Pumping is the pits...but keep up the good work! 6 lbs for a preemie is awesome! You sure know how to make adorable babies! (Could I use any more exclamation points?? lol)

10pm to 5am is party time, huh? Gotta get out of that habit, George, mama ain't got time for that. Tell that boy you're an adult now, you don't stay up past 10 pm. :o) When Dominic was first home, I had forgot how hard having a newborn can be and it seemed like he was never going to sleep in his crib, by himself. I spent about 2 weeks sleeping on the floor in front of his crib, actually. For some reason I thought that helped him sleep better? Or maybe I thought it was easier/quicker for me to get him for middle of the night feedings? I'm not really sure what my thought process was on that one, now that I think about it. haha He even, went through a phase (for about 4 or so months, he was about 5 months old til about 10 months) where he'd only nap if I was holding him. It was equal parts adorable and annoying. Thankfully he's over it now and takes an amazing nap in his crib. By himself.