It happened during our multi-state road trip a few weeks ago. We'd just reached an elevation of approximately 11,000 feet, near the top of Mount Crumpet or something like that (read: overlooking Denver and 45 minutes shy of our ultimate destination, which was my brother's house). We'd already seen the North Rim of the Grand Canyon and hiked briefly through Bryce Canyon. We'd stayed in and around the "parks" region of Southern Utah enough to be getting antsy of all the Mormon/cowboy weirdness, obligatory tourism, and blazing heat, and were driving intently toward Max and Megan's. The kids had only been mildly to moderately obnoxious that day, and Joe and I were just starting to shout to each other--over the usual child-related din--about how the minivan was doing with this grand journey.

Me: (puts feet up on the dashboard, and aims the A/C directly at pregnant torso) So how's the van doing?!
Joe: You know, it's actually doing amazingly well for being at almost 200k miles!

Me and Joe: Oh shit.

We put the flashers on and pulled over into a weigh station area for large commercial vehicles that was right near the tippy-top of the mountain pass. The kids started to get nervous, but we reassured them that everything was going to be fine; we just needed to put a little bit of oil in the car and all would be right as rain. Somehow we managed to coast in the far right lane to a gas station, where Joe poured in, like, four quarts of oil. The van was still loud, lethargic, and very unhappy. And the minute the guy at the repair shop heard the noise the car was making in an idle, he began to shake his head in a way that was both definitive and sad.

"The damage is done," the repair guy prognosticated. Due to some kind of loose bearing rattling around all over inside, the engine was probably minutes away from seizing. But that wasn't before he informed us that there was exactly jack-sh*t on the mountain in terms of towing, car rental services, or places to comfortably stop (other than where we were standing). We could cut our losses now or we could try to make it through THE ONE LAST TINY HILL of the mountain pass (about 3 miles long) before a long downward trajectory to the city.

Naturally, we decided to try to coast it.

100 feet into the THE ONE LAST TINY HILL, the van went to the little diamond mine in the sky. Indeed, it proved to be worth more dead than alive because the junkyard (after much ado and effort to get the title) offered us more for it than the CarMax dealership would have, had it been in any way serviceable. 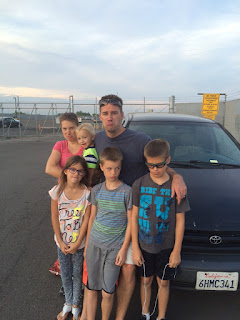 (This was taken after Triple-A finally showed up and the van was towed to the bottom. And Zach was the only one who didn't get the memo about making a sad face.)

Anyway, the van's long-coming martyrdom was a sacrifice that won't soon be forgotten; we got a much nicer car after Megan came and picked us up. The American Dream was alive and well for us that day, as we bought a very-gently-used, pricey foreign dream car with all the accompanying bells whistles, extra seats, and safety features.

Fast forward to today: I take four kids to the DMV to register a vehicle purchased out of state and only cried twice in doing so. Alas, that is a story for another day.
Posted by Laurel B. Miller at 9:55 PM 3 comments: