Toddlers Are Funner Than Tweens

Today we were running an errand that required being in the car for awhile, and we were short on time. Being a mother of nutritious integrity I made a hasty lunchtime stop at the Bad Place of Poison Burgers.

Somewhere along the line, James decided that throwing his entire hamburger across the minivan and calling me a b*tch was an age-appropriate and prudent way to communicate his displeasure with my particular choice of eatery (point taken). His reason for the insult--which was technically not swearing since he spelled the word out instead of saying it--? The burger smelled "like chemicals" and was giving him a headache.

"Fine," I said. "Starve." And sentenced him to clean out the whole minivan by himself. Because, like Tina Fey, I Will Not Have That Sh*t.

Anyway, the commotion of all this prompted Zachy to start chucking McNuggets at my windshield from his carseat. But hey, at least that made me laugh a little bit and marvel at his hand-eye coordination. Things took a turn for the worse when, shortly after that, I peed my pants for good measure a few times while sneezing and driving. This was also the same day I discovered that one of my favorite bloggers, The Coquette, has been DELETED by Tumblr for what is sure to be a very, very foolish reason (she completes me! Well, she and Julie Robichaux).

....Just in case you're ever wondering what that smell is when you're driving my van.

Man in the Mirror

Some stuff that came home in Elise's backpack this week: 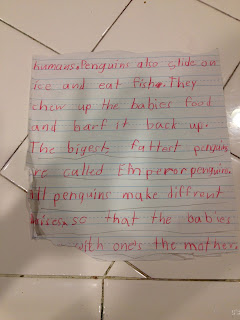 “They chew the babies [sic] food and barf it back up…”
I'm imagining the lesson: "and that's what's known as 'parental regurgitation behavior', kids. Okay, class dismissed for lunch." 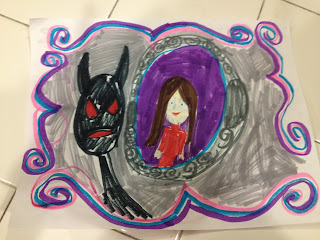 Not sure what to think about this, entitled The Mirror.
Posted by Laurel B. Miller at 5:58 PM No comments: