"Mom, I've been right about things before. And I think you might be having a baby." -Elise, ever-observant

"Mom, if you decide to have another baby, and I'm not saying you are, I'll help change diapers!" -James, making me cry the other day

Today has sucked a little bit.

First, I felt like sh*t. Had to cancel the kids' eye doctor appointments because I was too nauseous to function.

Second, I threw up repeatedly in my car (I made it into the trash can, though). This was while Zach and I were in the line at the Taco Bell drive-thru, because, you know, sometimes you NEED nachos and nothing else will suffice. Sometimes, you just NEED NACHOS or your body will punish you severely (mine did because I was about three minutes too late in getting said-nachos). Anyway, since the trash can is between the front seats, I twisted and writhed violently while puking and may have seriously pulled a muscle between my shoulder blades.

And you know how, sometimes when you puke, you puke so hard that tears come out? And pee? Yeah. So that was happening right as it was my turn to order. I rolled down the window; the dude working there asked me how my day was going.

I was still puking when I pulled up to the window, and he handed me my food between pukes.

Then, I felt bad for Zach because he kept saying, "Side!" and wanted to go outside and play. So we went to the park, despite my intense back pain. He ended up having a massive toddler tantrum and intentionally banged his forehead on the cement while we were waiting for the big kids to be dismissed from school. There was screaming and rolling and kicking. He was p!ssed because I'd had to make him leave the park to go pick up the kids. He has a huge gash on his forehead now. A few minutes later, my friend asked me if that was dried blood in Zach's hair; it was actually dried chocolate pudding, which he'd refused to let me comb out. Way to pull it all together to make me look like a good mommy, Son.

Now, Zach is eating more pudding because that's one of the only foods he will currently eat beside fruit snacks and popcorn. The big boys are watching TMNT, and Elise is out playing, and all is generally peaceful. But Zach is smearing pudding on his forearms.

At least Joe is coming home soon to make it all better. Sucks to be him, but I'm going back to bed ASAP.

Posted by Laurel B. Miller at 3:19 PM No comments:

I just heard that the Lively-Reynolds baby isn't named Violet, after all. She's not even named a girl's name, d@mmit.

And I don't have a lot of nice things to say about that, having a son named James and believing fervently that neither James nor Maxwell nor Thomas nor Wyatt Earp nor anything else with a strong tradition as a male name is suddenly appropriate for a female child just because a celebrity thought it would be cute.

So! Let us commence with the renaming!

James Violet Viola! Or Violin. Or pretty much anything other than James.

In other news, Elise is eight years old!!!!! 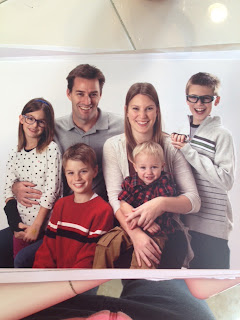 Yes, my kitchen counter is dirty. But no, that...that thing in the bottom of the frame is not what it looks like (get yo' mind out the gutter!) It's my jacket.

Anyway, I'm posting this in the spirit of 1) how blessed I'm feeling lately, and 2) how amazing this one photographer was who took our portrait last Friday. She frickin' ruled. The chaos that she managed to contain when she got that shot--James being his sarcastic tween self, Zach trying feverishly to get away, neither Will nor Elise even looking in this lady's general direction until the last second, etc, etc, etc--I just...wow. It's almost like she used some kind of black magic to crop out the various eyerolling, squirming, and tears.

This is my family, guys, and against many odds it's still growing. I am so lucky.