"Ahh!  I can feel his little piranha teeth!" -Will, putting his finger in Zach's mouth

"Well, do you want me to do it, or not?" -James, when I lectured him about the "mo' money mo' problems" aspect of inventing a teleportation machine/ becoming the world's richest man

"They were making me do little tiny floaty things with my hands, and it, like, wasn't doing anything!" -Elise, on learning to scull in her first synchro practice

The school year is quickly wrapping up; it's already almost May.  The big boys did science fair (Elise decided hers was just a practice this year) and had a weeks-long argument over who first came up with the idea they both used.  James refused to document his results on his poster, citing embarrassment that only one marigold seedling survived the 6" of rain we randomly received in one day.  Will's poster was more complete, but decidedly less legible.  Note to selves: make kids type it next year.  Second note to selves: find out whether brothers in the same grade are allowed to collaborate on a project, the way real scientists do.  Then, they can fight over which of them gets first authorship, like real scientists do.  Hah.

I can't wait to start Zach's mommy & me class this Friday.

And now, for a random photo.

I just read that a sequel to Magic Mike is a go.  So, I've decided to take this opportunity to randomly and obnoxiously brag, brag, braggity brag about my husband, Joe B.

As I was obnoxiously bragging to some of my momfriends yesterday, when I met Joe he was an almost-21-year-old captain of the swim team and dual sport athlete (he also played club water polo).  I, then 18 and uncannily career-minded, thought he was simply hot and fun to kiss and hug.

I had no idea he was also smart, responsible, and sensitive, and that I would want to have infinity babies with him.

Why am I writing about this?  Because every once in awhile it's a good idea to count your blessings, and I am glad to call him my guy.

Posted by Laurel B. Miller at 4:04 PM No comments: 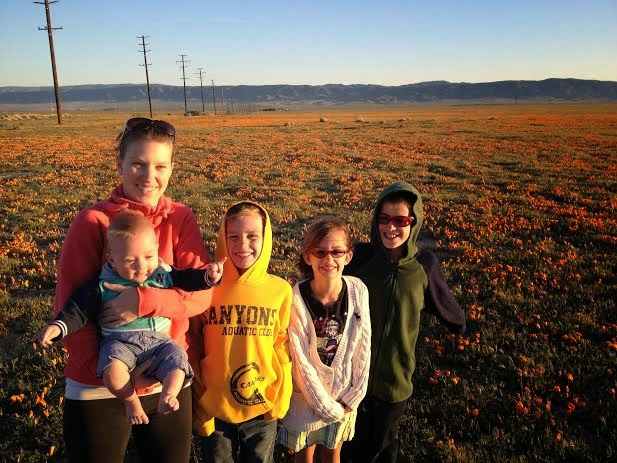 We drove to the fields west of Lancaster/Palmdale to see the California Golden Poppies.  It was late in the day, windy and cool, and the sun was going down, so the flowers were closed and not nearly as spectacular as they could have been.  It also wasn't as splendid a showing as in spring 2010, when the hills were ablaze with orange flowers.

Couldn't get a picture of all of us at once without taking the risk of trampling the flowers.  Joe and I had to take turns taking pictures of ourselves with the kids.

In order to make this mini-trip happen we had to bribe the kids with ice cream and getting to sleep in their pillow fort they'd made this weekend.

Still a pretty cool experience, though.  We'll try again soon, earlier in the day and when it's less windy.
Posted by Laurel B. Miller at 9:15 PM 2 comments: