James informed me yesterday that he has started a business with his "coworker" friend from school. His products are whimsical, accordion-legged pieces of origami that he calls "hubbies" which he sells in his classroom for 20 cents each. He proudly poured a pile of change on the table today as proof of his first income, and he claims to have a list of peers who eagerly await these wares. A backlog demand! We should all be so successful and enterprising. I do not know whether these hubbies are an original idea, but even if it turns out to be something for which he should be paying royalties to the makers of Pokemon, the whole thing is pretty darn cute. He is introverted and creative and somewhat of a benevolent weirdo these days, but he has a few good friends and a teacher who is enthusiastically supportive of his ventures. Ask him what he wants to be when he grows up, and he says, "An inventor!"

Will was righteously indignant this evening, as we were climbing into the minivan to take James to trampoline-&-tumbling. First of all, he had to sit in the back-backseat. (Someone always does, and by our family's rules it is always the last person who gets in the car.) The second grievance was that there was a banana peel back there with him. He put the banana peel in the spot where the trash can goes, but the trash can was not currently there (it was actually in the house, next to my bed, so I could puke into it). Throwing the peel away as best he could, he was inspired to call his siblings some names. "YOU'RE a rotten banana buttcrack!" Will roared at James, for some reason. James laughed good-naturedly, as did Elise. I couldn't help it, but I couldn't stop laughing either, and this infuriated Will. It got so bad that tears were rolling down my face, which was very distracting because I also happened to be driving and gagging at the time. Poor Will! I tried to tell him that it wasn't funny that he was upset, but what he had said was funny (and mean). He was not having it. But generally, Will is doing wonderfully these days, and has many friends, a second-degree orange belt in Tae Kwon Do, and an abundance of near-perfect grades.

Elise is a daisy girl scout now. She can sell a mean cookie, that girl! Not that this is the point of GS, or anything. She is also doing trampoline and tumbling, and seems to have scores of best-girlfriends. She was getting in trouble frequently for talking to her friends in kindergarten, to the point where the teacher had to rearrange the classroom so that she sits with all boys now. We have had lots of talks about this, and she seems to be improving a little. She is basically the opposite of me as a child, and I could not be more surprised or proud. 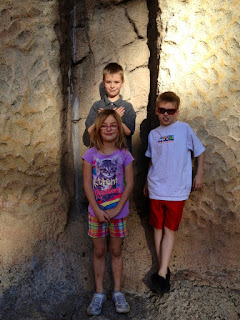